The Engineering Deans Council of the American Society for Engineering Education (ASEE) has recognized Cornell’s College of Engineering for being “among the nation’s leaders in inclusive excellence.”

The award letter states that Cornell Engineering has demonstrated a commitment to: 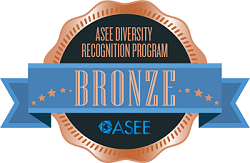 The ASEE Diversity Recognition Program was established in 2018 to publicly recognize engineering colleges “that make significant, measurable progress in increasing the diversity, inclusion, and degree attainment outcomes of their programs.” Twenty-seven applications were submitted in fall 2019 in order to be considered for acceptance to Bronze Level status—presently the highest level of recognition possible in the program. Lance Collins, the Joseph Silbert Dean of Cornell’s College of Engineering, was notified in early February that Cornell had been chosen as one of the awardees.

“The College has made a concerted effort for many years to expand opportunities and open engineering to people who have historically been excluded,” says Dean Collins. “It has truly been a College-wide effort involving Admissions, Advising, faculty, administration, various high school outreach programs, and, obviously, our nationally recognized Diversity Programs in Engineering team. We are honored to have received this recognition from ASEE and we look forward to making even greater progress in the coming years.”

“Our work is impactful because our college leadership embedded diversity into the infrastructure of engineering excellence,” says Jami Joyner, Director of Cornell’s office of Diversity Programs in Engineering. “We are proud to be recognized for the continued cumulative and collective efforts across the college to provide students with a diverse and inclusive engineering education. This recognition reinforces our commitment and investment in sustainable advances that propel all engineering students toward successful outcomes.”

Over the past ten years, Cornell Engineering’s undergraduate student body has achieved full gender parity, with women continuing to do as well or better than their male counterparts in terms of GPA and graduation rates. The college has also more than doubled its percentage of undergraduate students from underrepresented minorities, from 8% to 19%. The female tenure-track faculty population has grown to 21% and four of the College’s nine departments and schools are currently led by women.

The College will receive an official certificate attesting to Bronze Level status on April 21 at the Collaborative Network for Engineering and Computing Diversity in New York.

Students in Cornell Engineering's Kessler Fellows program will be embarking on internships with startups across the country this summer and engaging in work from modern beekeeping to designer jewelry... Read more about 2022 Kessler Fellows secure summer startup internships